In 2013, The Blue Coat School were struggling with an AV system that wasn’t fit for purpose. Their projector failed quickly after installation, meaning the hall couldn’t be used for many of its intended functions. They asked us to help them get things back on track…

“The original project just wasn’t fit for purpose,” says IT Manager Frankie Paterson. “The projector was never meant for a seven metre wide screen and the connections weren’t right, which meant that the signal degraded from the input to the projector, and we were having reliability issues with the connection. Then, as soon as the bulb started deteriorating, you couldn’t see the screen at all, which meant we couldn’t really use the hall as intended.”

The school spent 24 months planning the refurbishment, and drew up a list of requirements for IT suppliers to meet. “We wanted at least 8000 lumens and full HD, we wanted the projector to be laser because we didn’t want to be dragging the stage ladders out and changing bulbs all the time, and we needed it to be almost 100% quality until the light source did fail,” says Frankie. “And we wanted to be able to input from devices at stage level and from the back of the hall [in our control room].”

We demoed three different projectors that fit the bill, with the school eventually choosing the E-Vision Laser 10K, a 10,000 lumens projector that was three times more powerful than the model it was replacing.

“This was the cheapest model we were pitched, but it’s still fantastic, and because of it the hall gets used a lot more for AV,” says Frankie. “Previously, the projector wasn’t used much – but now it’s being used a lot more in plays, where previously they’d have just put a backdrop up. And in presentations we’ve got confidence that people are going to be able to see what’s on the screen, so we’re getting a lot more use out of the space.”

"It’s been a huge project, but I’ve always had a good experience with the Jigsaw24 team. Everyone who comes into contact with them likes them, and even when there’s a problem, everything’s addressed swiftly. They’re very approachable and it’s a pleasure to work with them when they’re here."

Finding an easier way to connect

One of the major issues the Blue Coat team had with their existing setup was that the connection between the ground-level inputs and the ceiling-mounted projector was unreliable, and the image quality deteriorated badly between the input and output.

“Jigsaw24 were able to come in and recommend the best way to input everything,” says Frankie. “Rather than just using a basic HDMI to HDMI setup, we’re using an Extron setup, which is excellent and interfaces with everything seamlessly. We can have multiple devices plugged into it and we can switch between them instantly, whereas before we’d have to physically swap the cable over.

“The other great thing about the Extron is that it unifies any VGA, HDMI and audio input and scales it, so the projector sees something that it can easily output. Previously, when you plugged in inputs with different aspect ratios or interfaces, you’d get a bizarre image on the screen, whereas now the Extron works it all out and outputs a standardised image, so it always looks crisp.”

Ready for the future

“You could say some of our equipment is overkill, but it’s got to stay in there for ten years,” says Frankie. “Now we’re not using an incandescent bulb, the projector’s not going to fail or start to degrade halfway through its life, it’s going to keep working well until the LED matrix fails.”

Another long-term investment the school has made is in interactive touchscreens. Having used Interactive White Boards for several years, they’re now transitioning to touchscreens because “the projectors on IWBs are 14 years old and you can’t get the spares for them all. And because it’s a projector not an LCD, you’ve got the issue of changing bulbs all the time and cleaning the projectors, which is all very time-consuming,” Frankie explains. “And they don’t need a pen to work – if you lose a board pen, your board turns into a glorified projector.”

The project has been going on for some time now, and the school have replaced almost all of their 46 screens. “It’s been a huge project, but I’ve always had a good experience with the Jigsaw24 team. Everyone who comes into contact with them likes them, and even when there’s a problem, everything’s addressed swiftly. They’re very approachable and it’s a pleasure to work with them when they’re here.”

Download this case study as a PDF. Want to know more? Fill in the form below, or get in touch with the team on 03332 400 888 or at education@Jigsaw24.com. For the latest news, follow us on LinkedIn, Facebook and Twitter. 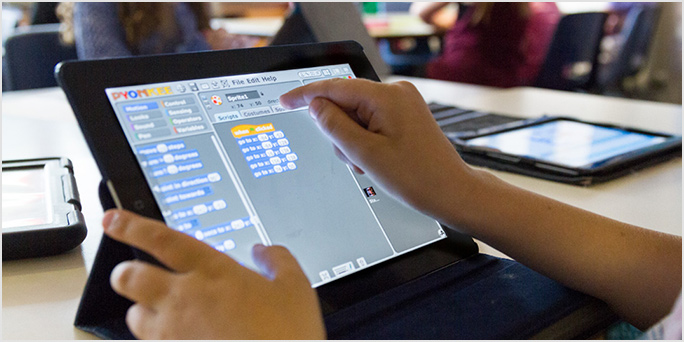 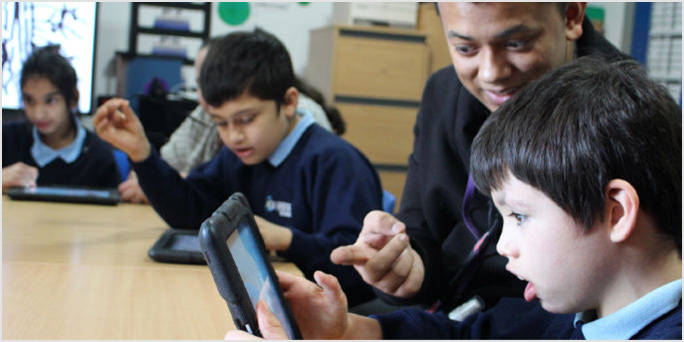